The Homeless Population In Denver, Colorado

The homeless population in Denver, Colorado

The number of people in Denver who reported to be homeless for the first time doubled over 2020, with people of color making an excessively high percentage.
Denver has over 6,000 living on the streets because of causes like poverty, substance abuse, and domestic violence. Over 400 people on the streets live with their families. They live badly in open areas, under bridges, abandoned cars, and unused buildings.

Another problem is the high number of deaths in the community without a home. At least 269 of them died in 2021. The deaths increased by 21% from 2020 figures. A report by Colorado Coalition for the Homeless shows that loss of lives is almost a 60% jump compared to five years earlier.

Data from the medical examiner’s office in the city shows that environmental exposure and drug overdoses are the cause of most fatalities. Natural causes account for only 21% of deaths in street communities.

A high rate of drug use among the homeless communities and encampments is a harsh reality. Unfortunately, the problem affects even those who do not engage in substance abuse. Those who inject drugs discard the needles everywhere, raising the risk of spreading blood-borne infections like HIV and Hepatitis. Contaminated needles are a huge environmental issue. It is horrifying to find some areas they can poke children or get into water systems and contaminate drinking water.

The homelessness crisis might worsen in 2022 as the lack of affordable housing, COVID pandemic, drug use, crime, and extreme weather continues affecting people living on the streets.

Denver’s mayor’s administration is trying to address the problem of homelessness. It launched a campaign to relocate 576 people into shelters. Mayor Michael Hancock’s administration also created no-camping zones at specific parts of the city to combat homeless encampments. The city authorities also made shelter responses to protect the vulnerable populations.

Auxiliary sheltering is one of the shelter responses. It provides beds, showers, laundry, and health services to lure populations from encampments to safer, healthier environments.

Denver Crime Scene Cleanup can help with the cleaning of encampments. 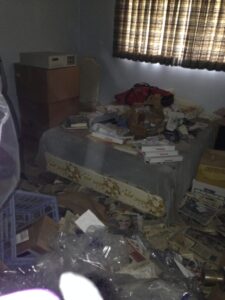